The Education of an Anti-Imperialist: Robert La Follette and U.S. Expansion, Richard Drake 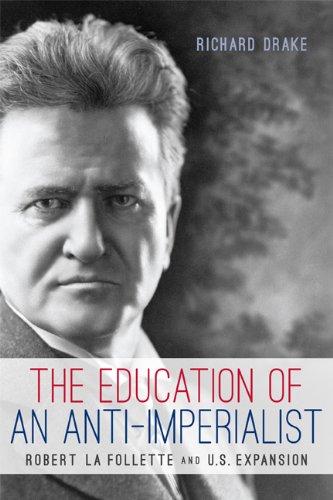 “History,” Winston Churchill is reported to have observed, “is written by the vic­tors.” The losers, if they are lucky enough to avoid vilification, are airbrushed out. When it comes to our understanding of American foreign policies of the first four decades of the twentieth century, the history-writing victors have, for the most part, been liberal internationalists. Democrats and Republicans alike, in the wake of the Second World War, concluded that the task of making the world safe for America demanded active, global U.S. politico-military engagement. In the name of liberal international institutions, Washington’s “Farewell” injunctions against entangling alliances would be consigned to the waste bin of quaint anachronisms.

A policy shift of this magnitude necessarily required a reinterpretation of history—in this case, a rehabilitation of Woodrow Wilson and particularly Wilson’s rejected brainchild, the League of Nations. In the account of American foreign policy learned and taught by the Greatest Generation, a central tenet has been that America’s refusal to endorse Wilson’sleague was a cardinal failure and critical factor in the road leading to World War II. While

The Navy in the Post-Cold War World: The Uses and Value of Strategic Sea Power, Colin S. Gray Reviewed by Edward Rhodes

Controlling and Ending Conflict: Issues Before and After the Cold War, Stephen J. Cimbala and Sidney R. Waldman Reviewed by Edward Rhodes