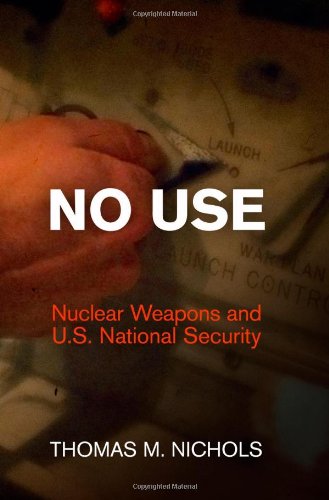 At around 5,000 total warheads, the U.S. nuclear stockpile today is a fraction of its former self. One therefore might presume that U.S. nuclear doctrine has undergone an equally significant transformation since the end of the Cold War. Thomas M. Nichols disabuses readers of this notion, showing how the machinery of “mutual assured destruction” remains predominant even though the world that spawned this doctrine disappeared with the Soviet Union. But this doctrine is now obsolete, Nichols argues. Deterrence no longer requires—if it ever did—an expansive nuclear inventory with diverse delivery platforms, a launch-on-warning alert posture, and convoluted targeting plans. In Nichols’s view, a pocket-sized nuclear deterrent would be adequate. Yet U.S. strategy remains saddled with the costly baggage of an arms competition that ended a quarter-century ago.

Nichols’s antidote: a “minimum deterrence” doctrine, which aims to deter adversaries with a few nuclear weapons, rather than thousands. He proposes, among other measures: unilateral nuclear reductions; a presidential declara­tion that the United States will never use nuclear weapons first in a conflict; re­targeting missiles toward enemy infrastructure rather than cities and military assets; ending national missile defense programs; forgoing nuclear retaliation altogether against smaller powers; and, most provocatively, dismantling the (implicit) nuclear umbrella protecting U.S. allies. A doctrine with these features, he maintains, would be better suited to the threats faced by the United States today.

Nuclear strategy is a subject often laden with technical jargon and cumber­some language. Indeed, Nichols wryly notes, “a significant portion of the U.S. establishment … did not understand” the Pentagon’s own 2002 report on nuclear posture (p. 72). Readers will have no such trouble with this book, which evaluates U.S. policy in a nontechnical and accessible manner. Most convincing is Nichols’s argument about the futility of maintaining a lengthy menu of options for employing nuclear weapons in a crisis. Nuclear conflict, Nichols argues, is not a poker game in which players can gradually raise the stakes by betting a few more chips. In the emotional heat and fog of a real crisis, the difference between a careful nuclear strike against selected military targets and an all-out “countervalue” attack against cities is “purely theoretical” and “would have no relevance to a national leader” (p. 103). If, as a former U.S. National Security Adviser once argued, “a decision that would bring even one hydrogen bomb on one city of one’s own country would be recognized in advance as a catastrophic blunder,” then the United States is indeed wasting vast sums to maintain an unnecessarily large nuclear deterrent.

If anything is missing from this book, however, it is a compelling case for urgency. Nichols maintains that current U.S nuclear doctrine is “outdated and dangerous” (p. 104), but offers little support for the latter half of that claim. Skeptics of nuclear reductions argue that it is safer to err on the side of caution; better to have too many weapons, the logic goes, rather than risk having too few. To blunt this argument, advocates must show that traditional deterrence is more than just passé; it is also unsafe. While this book is not intended to be a historical study of the dangers of nuclear deterrence, it makes this case mainly with assertion rather than evidence, appealing to the opinions of former officials instead of utilizing the extensive empirical literature on the consequences of nuclear deterrence. Yet on logical grounds, Nichols has ma­neuvered into a strong position in a debate that is likely to continue for years to come.