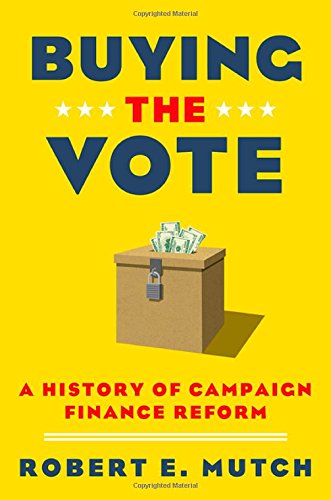 No one would deny that our nation’s campaign finance laws are intimately connected to deliberations on larger matters of public policy. Few writers have done as much to explore the history of this relationship as Robert E. Mutch. Mutch’s outstanding and important new book Buying the Vote succeeds on two levels. First, it is a comprehensive history of American campaign finance law, with a focus on the early twentieth century. Mutch painstakingly assembles estimates of the true costs of elections in 1904, 1908, and other years that have rarely received scrutiny. He demonstrates that these elections were every bit as expensive as modern elections and that wealthy donors of the time were, if anything, more restrained than today’s top donors. Mutch also corrects the conventional wisdom about heroes and villains in American politics of the era; for instance, he shows that the much-maligned William Howard Taft did more to restrain campaign spending than his Progressive predecessor Theodore Roosevelt. Mutch’s engaging retelling of the financing of these elections demonstrates that there has been surprising continuity in how Americans have thought about campaign finance over the years.

Second, Mutch argues that recent changes in American campaign finance law are part of a much larger puzzle. One consequence of the growing polarization of American politics is that issues we thought had been resolved decades, even centuries ago are newly contentious. This is the case for labor law and tax policy, and it is most definitely the case for campaign finance law. Mutch connects contemporary subjects of concern in campaign finance law to discussions of the Progressive Era. Despite a focus since the 1970s by advocates and opponents of deregulation on whether campaign contributions corrupt, the real question, Mutch argues, has always had to do with the rights and responsibilities of corporations. The focus on “corruption,” he argues, is a matter of accommodating arguments to the language of the Supreme Court. This is regrettable, for Mutch; people talking about money “outside of the court bubble” (p. 192) could make less contorted arguments by using other words and evoking other values, but few do so.

Buying the Vote serves as well as a rejoinder to the “hydraulic” theory of money in politics. No set of laws will prevent political money from finding its way into the system, but campaign finance regulations can serve as important symbols, clarifying the boundaries of what society believes to be acceptable. Even though some political actors might try to circumvent these laws, many will not. Mutch shows that despite the porous nature of the law in the 1910s and 1920s, many corporate donors reined in their political spending simply because it was clear that the law now frowned upon it.

Mutch concludes on a pessimistic note. He laments the “judicialization” of campaign finance but suggests that this is inevitable. Whatever consensus political elites had on appropriate limits on the role of money in politics had collapsed by the end of the twentieth century. Our political class no longer has a consensus on the values that our campaign finance laws might symbolize or what elections should look like. Therefore, campaign finance laws are inherently political. The campaign finance debate ever since the Buckley v. Valeo decision has involved seeking legal solutions to a political problem—something that is not possible within the American system, and certainly not possible in today’s climate. With the unraveling of this consensus, Mutch argues, democracy does not really work—we have what look like democratic elections but no commitment to democratic values by any of the major players.

Opting Out of Congress: Partisan Polarization and the Decline of Moderate Candidates, Danielle M. Thomsen Reviewed by ROBERT G. BOATRIGHT