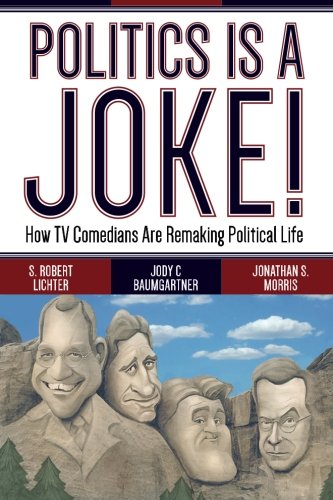 For the past decade, scholars have been trying to understand how political humor shapes public opinion, political knowledge, and behaviors. While many of these experimental and survey research studies have successfully isolated effects and explicated psychological mechanisms through which humor affects the public, historically, such studies have been limited in scope. In Politics Is a Joke, S. Robert Lichter, Jody C. Baumgartner, and Jonathan S. Morris present an analysis of the most sweeping data set of late-night political joke transcripts that has ever existed, the Center for Media and Public Affairs’ late-night joke archive from the early 1990s through 2012.

The authors make use of this rich data source through top-line analyses of the targets (who the jokes are about) and topics (what the jokes are about) of jokes made over a more than 20-year period. With detailed discussions of the most commonly made jokes about high-profile politicos, the book would serve as an entertaining supplement to any undergraduate course exploring the postmodern presidency, elections, or the role of entertainment in our current political environment. Students would particularly enjoy the qualitative historical descriptions of those moments in history that serve as the backdrop to and basis for the most popular joke categories (for instance, the several-page summary of the Clinton–Lewinsky affair).

The book also offers a qualitative exploration of politicians’ appearances on late-night shows. In a chapter titled “If You Can’t Beat Them, Join Them,” the authors chronicle how politician appearances evolved from Richard M. Nixon’s “Sock it to me” on Laugh-In in 1968, to Clinton’s playing the saxophone on The Tonight Show with Johnny Carson in 1988, to the candidate appearances we know today. Contextualizing the politician “appearance” as a logical antidote to the programs’ constant barrage of political mockery, the authors explain how cameos and sit-down interviews on these shows can be used strategically by politicians to enhance their visibility and likeability (although, as the authors show, examples of failed efforts abound).

Unfortunately, what this text offers in terms of scope, it lacks in theoretical orientation and empirical rigor. It is difficult, if not impossible, to identify a unifying orienting question that the text seeks to answer. It is equally impossible to find an appropriate reliability coefficient to help the reader understand whether these codes (which serve as the foundation for the book) actually mean something (the 80 percent agreement cited on p. 11 does not bode well for a likely Krippendorff’s alpha check).

The book does offer isolated observations that readers will find important and intriguing. Take, for example, the fact that Bill Clinton was such a popular target of late-night jokes even after leaving office that in 2001, he beat President George W. Bush as the most mocked politician, a finding that the authors discuss in terms of the difficulty that comedians had making fun of Bush in the aftermath of September 11. It is in translating these isolated observations into some broader proposition where the text falters.

Most perplexing, perhaps, is the fact that the dominant rhetorical frame throughout the text is one of “effects.” The last line of the book reads, “What we laugh at affects what we think about politicians and how we think about politics, whether we know it or not” (p. 217). Yet the text never actually examines effects. The closest it comes to an effects study is a chapter called “Laughing Matters: News, Comedy, and Public Opinion,” which presents graphs (which are frustratingly hard to read) tracking aggregate-level presidential approval ratings, news content, and joke targets over time. The authors go to great lengths to remind the reader that these aggregate data are not illustrative of causal relationships. But because the dominant frame throughout the book (and its subtitle) is “How TV Comedians Are Remaking Political Life,” it is clear that the authors, despite their caveats and protestations, want us to read: content = effect. Provided that readers do not fall into this rhetorical trap, audiences could certainly find some benefit in using the text as a political-jokes-as-cultural-barometer-encyclopedia to complement—and bring levity to—their understanding of American presidential history.