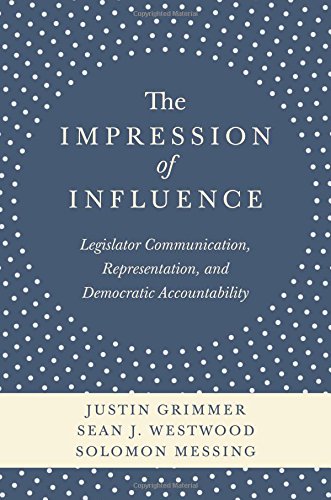 Justin Grimmer, Sean J. Westwood, and Solomon Messing have produced a noteworthy essay that grapples with the broad question of democratic accountability. Their testing ground is the U.S. House of Representatives. Through an analysis of member press releases and a series of experiments, the authors make the case that members are adept at taking credit, and obtaining credit, for government spending that occurs in their districts. I suggest that one of the primary contributions of the work is that the authors uncover members of Congress deceiving their constituents, causing them to believe they are doing more to help the district than they actually are. Interestingly, the authors also find that the deception drives members to accomplish the tasks they speciously led constituents to believe they deserve credit for. The deception circuitously leads to more spending for the district.

The book’s subtitle suggests that the work seeks to explain “legislator communication,”“representation,”and “democratic accountability.”In effect, these are the dependent variables, or the phenomena of interest, the work attempts to illuminate. I hold that the work is most successful at explaining the first consideration: the way members communicate with their constituents.

With the other two concerns, there is less in the way of syst

Issue Positions of Democrats and Republicans in the U. S. House, 1998: A Research Note, Scot Schraufnagel and Jeffery J. Mondak