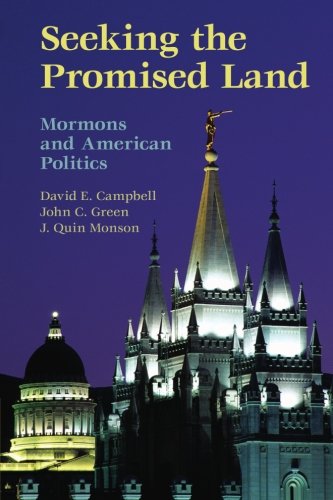 The metaphor that is the title of this book refers to Mormons’ search for acceptance in the American body politic without losing their religious distinctiveness. The book begins with a survey of Mormon beliefs, practices, and historical conflicts with American law and custom. It ends with an effort to measure the degree to which degree Mormons have and have not achieved their Promised Land. That said, the authors are primarily interested in showing how political conflict has shaped and continues to affect Mormon political preferences and institutional strategies, as well as public anxiety about them. Specifically, the authors promise to explain why Mormons are so invariably Republican, not only in numbers but also in degree of partisanship, and how this affects their political status.

The book’s analytic frame and primary methodological approach is provided by statistical analyses of polling data on contemporary political attitudes among and about American Mormons. Much of this material comes from 14 polls, primarily from Pew and Gallup, surveying the religious dynamics of the Mitt Romney presidential campaigns. In addition, the authors conducted five surveys that identified with greater specificity the intentions and values of American Mormon voters during this period.

After explaining the significance of Mormonism’s authority stru