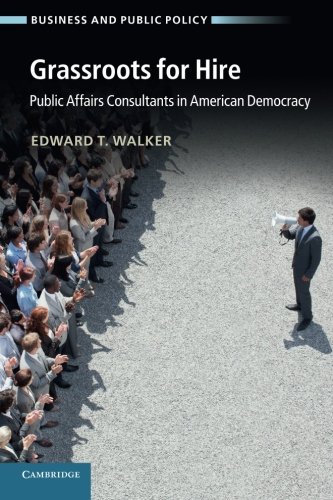 Planting sod or laying Astroturf? Edward T. Walker’s new book investigates whether professional consultants who organize grassroots campaigns on behalf of paying clients are rightfully conceived of as gardeners, carefully tending organic growth into desirable forms, or as manufacturers producing an ersatz substitute from artificial materials. While he describes a number of colorful instances of the latter—such as Citizens for Fire Safety, a supposedly independent group of concerned citizens revealed by the Chicago Tribune to be a front group created and funded entirely by producers of fire-retardant chemicals— Walker’s claim is that such examples are unrepresentative.

The true function of public affairs consultants, he argues, is the selective activation and mobilization of constituencies that share a preexisting—and therefore authentic—interest in achieving the client’s goal. This process gives rise to what Walker terms a “subsidized public,” in which intervention by consultants selectively lowers the barriers to participation among certain groups whose interests happen to coincide with those of the consultant’s clients. Applying Mancur Olson’s classic logic, we can expect such selective intervention to lead to an unbalanced pluralist playing field and, presumably, differences in p