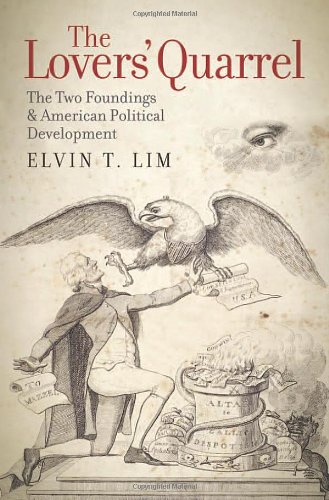 Elvin T. Lim contends that the American “Founding” was not a monolithic event. Rather, the United States has experienced two distinct founding moments, and American political development can (and should) be understood through these two irreconcilable foundational moments. Accordingly, the First Founding, consisting of the Declaration of Independence and the Articles of Confederation, emphasized the principle of independent state sovereignty; the Second Founding, embodied in the Constitution, aimed at a more perfect union by subordinating the principle of the First Founding. As such, Anti-Federalism (the First Founding) and Federalism (the Second Founding) are two competing foundational concepts in the reoccurring debates—the “Lovers’ Quarrel”—over the expansion and contraction of federal authority. This is to say that the United States twice constructed a national identity around two distinct understandings of union.

Using foundational concepts as an analytic tool is not a new approach to understanding political development. For example, Lim recognizes that theories of liberalism and republicanism “have taken turns as the dominant tradition in American political thought” (p. 13). However, these theories were appropriated from European thought, and, where he perhaps makes his most important contribution,