Scalia: A Court of One, Bruce Allen Murphy 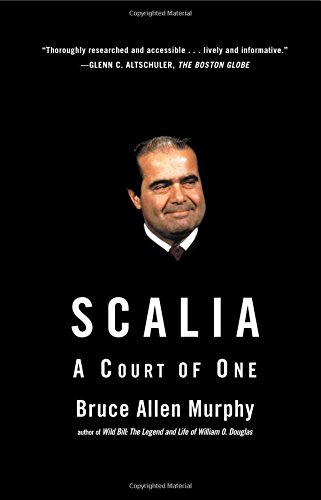 In this book, Bruce Allen Murphy describes his subject as “one of the most brilliant, vocal, and controversial justices ever to serve on the U.S. Supreme Court” (p. 4). He might have added “one of the most influential” because, as even his ideological adversaries have acknowledged, Scalia’s interpretive theory of “originalism” fundamentally altered the shape of American constitutional law.

Scalia: A Court of One begins by describing Antonin Scalia’s intellectual development and then traces how his ideas and philosophy progressed over the course of his career. Along the way, the book provides a lively and readable account of many of the most important cases faced by the U.S. Supreme Court during Scalia’s tenure. It also presents the thesis foreshadowed by the title—that Scalia acted as a “court of one,” choosing to advance his own positions in his own style, even at the expense of alienating potential allies.

A Court of One, however, is more than a narrative. It is also a strident critique of Justice Scalia’s jurisprudence and legacy. Some of the criticisms are well founded. Murphy, for example, marshals an array of impressive arguments challenging the merits of originalism, including Justice David Souter’s position that the purposeful vagueness of many of the Constitution’s key provisions necessarily requires contemporary elaboration and historian Joseph Ellis’s contention that the Framers would have neither supported nor expected that subsequent generations would pursue an originalist approach (pp. 411–416).

Murphy is also on solid ground when he questions Scalia’s consistency in applying his own methodology. As Murphy notes, Scalia abandoned originalism in Bush v. Gore (p. 279), and that is far from the only example. Scalia also diverged from his originalist understanding in cases addressing property rights, religious exercise, sovereign immunity, and equal protection. Justice Scalia, it turns out, was not always the purist he purported to be.

Some of Murphy’s other criticisms, however, are less persuasive. Murphy’s constant calling out of Scalia for his extrajudicial activities, for example, comes across as needless sniping. And his suggestion that Scalia allowed his religious beliefs and professional ambition to overly influence his judicial decisions is hardly supported by the scant evidence that Murphy provides.

Most problematic, however, is Murphy’s implicit charge that by acting as a court of one, Scalia alienated centrists such as Justices Sandra Day O’Connor and Anthony Kennedy and thereby limited his accomplishments and damaged his legacy. I am not so sure. For one, there is some question as to whether this account is factually accurate. Murphy himself credits Scalia with bringing Kennedy over to the majority in Bush v. Gore, even though that occurred after the time when, according to Murphy, Scalia had already “[lost] the middle” (Chapter 5). More fundamentally, the proposition that a Supreme Court justice would vote differently if one of his or her colleagues had treated him or her more respectfully in a previous case seems particularly speculative.

But even if it is true, criticizing Scalia for failing to compromise misses the larger point. The heart of Scalia’s legacy lies in his efforts to win wars, not battles. If Scalia’s legacy is to be tarnished, it should be because he failed to adhere to his own methodology in cases such as Bush v. Gore and not because in other cases he refused to compromise.

This does not mean that Scalia’s theory of originalism is the best method of constitutional interpretation or even that it is a good one. But whether one likes it or not, Scalia’s originalism reframed the debate in constitutional law. And on that count alone, Justice Scalia should be given his due.