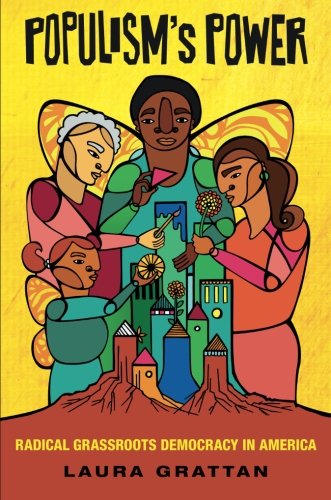 Donald Trump’s candidacy brought “populism” to the forefront of public discourse, reinforcing a long-standing connection between populism and reactionary conservative politics. But that connection does not have to stand, as Laura Grattan’s Populism’s Power makes clear. Populism, Grattan argues, can serve more radical, progressive ends, so long as it is oriented horizontally to include more diverse, marginalized people. As an alternative to reactionary conservative populism, Grattan proposes “aspirational democratic populism,” which aims to harness “people’s rebellious aspirations to share in power, and to do so in more pluralistic, egalitarian ways, across established borders that restrict politics and democracy” (p. 20). In this form of populism, an ever-expanding “people” build “a set of tensional relationships between outrageous resistance, everyday politics, and structural revolution” (p. 39). Central to these relationships are symbols, appeals, and rhetorical practices that “arouse collective identification around counterhegemonic visions of democracy, while building cross-cutting coalitions among efforts to enact popular power” (pp. 141–142). These rhetorical practices will attune populism to the radical needs of the twenty-first century.

Populism’s Power makes a strong, compelling case for rescuing populism from the political playbook of reactionary conservatives. However, I should note the book’s primary weakness—Chapter 3. According to Grattan, the 2006 Chevrolet advertisement “Anthem” tries to sell Silverado pickups by helping viewers imagine a white, masculine, exclusionary world of reactionary populism. Conversely, Cohen’s 1992 song “Democracy” helps listeners imagine an expansive, inclusive, progressive world of aspirational democratic populism. This chapter is the weakest not only because it juxtaposes two completely different mediated artifacts—is it fair to compare a 2006 truck ad to a 1992 Leonard Cohen song?—but also because it fails to show that these are, in fact, populist representations. Populism is inseparable from full-throated antagonism with the status quo, but such antagonism never comes through in Chapter 3. Grattan suggests that the Chevy ad subtly positions its target audience against nonwhite outsiders, but lacking fervent opposition, the ad seems more nationalistic than populist. Likewise, Cohen’s song depicts various scenes of uncertainty, disruption, and difference, but these scenes are ultimately those of democratic life, not of populist struggle. Populism can only be populism with unmistakable vocalizations of antagonism and opposition; these are what call people together for resisting the status quo.

While Chapter 3 fails to make its case, Populism’s Power on the whole is a compelling treatment of how radical democratic activists can use populist appeals to build pluralistic, egalitarian coalitions in the twenty-first century. For all those who associate populism with Donald Trump’s reactionary conservatism, Grattan’s book demonstrates how “populism’s power to transform democracy has always been at its most radical when grassroots actors pluralize and connect their experiments in horizontality” (p. 199).