The Inevitable Party: Why Attempts to Kill the Party System Fail and How they Weaken Democracy, Seth E. Masket 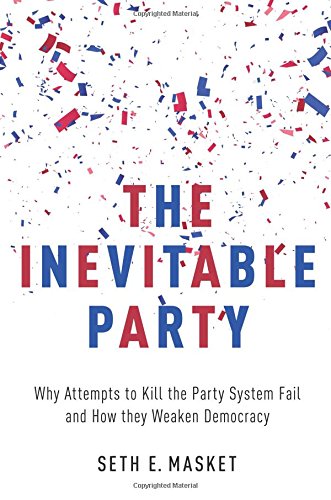 In a variety of ways over the last half century, reformers have sought to make the practice of American democracy correspond more closely with the theory of majority rule. However, a spate of recent scholarship argues that these reform efforts often failed to solve the problems they aimed to fix. More often, they generated unintended consequences. While some old abuses may have been eliminated, we now have intense partisan polarization, little trust in government, and majorities reporting that the country is on the wrong track.

In The Inevitable Party, Seth E. Masket joins the current antireform chorus. He argues that efforts to eradicate political parties weaken democracy. Party reform is a game of whack-a-mole: change one part of the party system and the parties adapt and emerge as strong, or stronger, than before. While “the actual substance of party behavior in American politics, over the long run, changed very little in response to various reforms” (p. 6), each reform effort “exacts a price on democracy” (p. 150). Masket concludes by urging “reformers to simply stop reforming” (p. 16).

To make his case, Masket focuses on parties in state government. In five empirical chapters, he examines the consequences of reform in California, Colorado, Minnesota, Nebraska, and Wisconsin. Each state has tried different things. Colorado introduced new campaign finance rules in 2002; Nebraska has a combination of nonpartisanship, unicameralism, and term limits for state legislators; Minnesota tried a nonpartisan legislature; California has a nonpartisan gubernatorial recall election system; and Wisconsin adopted direct primary elections.

Using a battery of methods to tease out the lessons from these case studies, Masket finds that in each state, the reforms had unintended consequences. Colorado’s new campaign finance system appears to have empowered wealthy donors and made its parties stronger rather than weaker. Nebraska’s nonpartisan legislature polarized more quickly over the last decade than any other state, and term limits have increased the power of interest groups in the state’s politics. Minnesota’s legislators ended up creating informal blocs in the legislature when party labors were prohibited. California’s nonpartisan election in the wake of the recall of Governor Gray Davis turned out to look like a conventional partisan election. Wisconsin’s legislators became more partisan and less representative of their districts after the adoption of the direct primary.

The Inevitable Party is a well-written and accessible book. The case studies are rich and interesting. The focus on state parties is particularly welcome, as so much recent research focuses on what is happening in Washington. However, there is some fuzziness in the major lesson that Masket seeks to draw from his cases. If the parties always adapt to reform and party behavior changes little over the long term, then it is unclear why reform weakens American democracy. Even if the reforms change the character of the parties and the party system, it is unclear how democracy is weakened because “democracy” is left largely undefined.

Nonetheless, to its credit, The Inevitable Party raises a fundamental question and provides some evidence to grapple with it. Most pointedly formulated by Edward Banfield, that question is whether society would be better off with more professional or “elitist” parties that seek to “refine and enlarge the public views” or with parties that are more responsive to the popular will and correspond more closely to a democratic ideal of majority rule. While largely overlooked by political scientists today, Banfield long ago argued that undemocratic features of our old party system actually protect democracy, and he predicted that efforts to change it would not produce good outcomes. Masket’s findings make Banfield look more prescient.