The Political Origins of Inequality: Why a More Equal World Is Better for Us All, Simon Reid-Henry 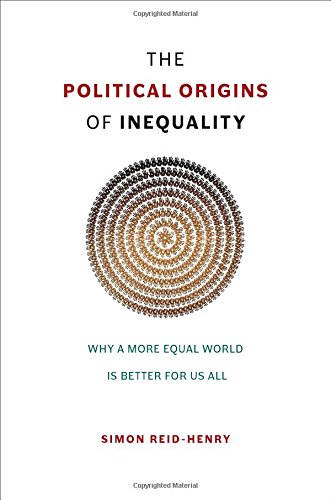 Simon Reid-Henry tackles two enormous questions: what are the causes of global poverty and inequality, and what can be done to ameliorate it? Reid-Henry offers new insights by rethinking the premises of both questions. Too often, those interested in global poverty, he argues, focus on the poor (and poor countries) and what they should be doing differently. The great debate that ensues is an economic one that focuses on whether global aid and development policies are worth pursuing in light of their minimal success in reducing poverty. This debate, he argues, results in too much emphasis on economic growth as the sole measure of success rather than social prosperity and equality. As a result, global poverty and inequality persists.

So, how did we get here and where do we go? Reid-Henry argues that much of the blame rests with a Western-style market in which notions of equality of outcomes are largely ignored. Market instruments and an obsession with economic growth and development have advanced the interests of the wealthy at the expense of the poor. For example, Reid-Henry credits Paul Volcker’s gutsy decision to raise interest rates in the 1970s with plunging “not just the United States but also much of the rest of the world into recession and unemployment” (p. 87). While neoliberal economic policies and free trade are presented as the prime