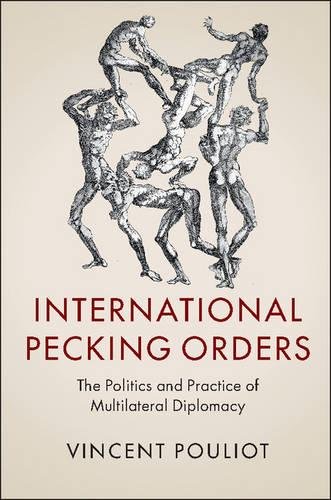 In the international system, every sovereign state is formally equal, but when it comes to exercising influence in international organizations, some appear to be more equal than others. How does such hierarchy persist under conditions of formal equality? Rejecting traditional materialist explanations that reduce interstate hierarchy to the military and economic capacity of different states, the author offers an alternative account grounded in intense fieldwork and a detailed engagement with the everyday social practices of diplomats at NATO and the United Nations (UN). Pouliot argues that the “pecking order” among diplomats who serve in the permanent country missions at these multilateral organizations emerges from the efforts  of those diplomats to “turn the country’s externally defined attributes into diplomatic capital” (p. 84). The practice of diplomacy is thus conditionally autonomous from the distribution of material capabilities, and state wealth and power alone do not suffice as an explanation for negotiated international outcomes.

Drawing on the practice theory of Pierre Bourdieu, Pouliot reconstructs the “field”—the structured arrangement of positions, norms, rules, and procedures—that defines what it means to be a competent diplomat in each of these multilateral settings. As diplomats “

International Theory: To the Brink and Beyond, Andrew P. Dunne Reviewed by Patrick Thaddeus Jackson