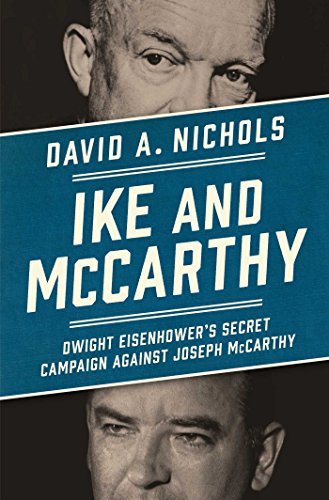 Dwight D. Eisenhower has come a long way since the 1950s, when one prominent historian dismissed his administration as “the bland leading the bland” (Eric F. Goldman, The Crucial Decade—and After [New York: Alfred A. Knopf, 1956], 344). In a recent poll, prominent presidential scholars ranked Ike as the fifth-best president, just ahead of Harry S. Truman. At least since the publication of Fred I. Greenstein's influential Hidden Hand Presidency: Eisenhower's Leadership, we have known there was a lot more to Ike than met the eye of many of his contemporaries. There is probably no better example of Ike's hidden hand than his behind-the-scenes role in blunting Joseph R. McCarthy's anticommunist rampage. It was once thought that Eisenhower lacked the courage to take on the red-baiting Wisconsin senator. “He's just a coward” and “doesn't have any backbone at all,” Truman was quoted as saying about his successor (Merle Miller, Plain Speaking: An Oral Biography of Harry S. Truman [New York: G.P. Putnam's Sons, 1974], 134) We have known for a long time that Ike not only despised McCarthy but also played a major role in his undoing. But David A. Nichols's thoroughly documented account provides rich new detail about how Eisenhower quietly helped engineer McCarthy's fall from grace.

Eisenhower's reluctance to take on the Wisconsin senator in public stemmed not from cowardice but from the not unreasonable fear that denouncing McCarthy risked emboldening him. Better, Ike thought, to launch a “disciplined, deceptive” anti-McCarthy campaign—a campaign “agile enough to respond to new circumstances and carried out by loyal foot soldiers” (p. 287). Ike would get under McCarthy's skin by depriving him of what he craved most—attention. Meanwhile, under the president's quiet direction, loyal “foot soldiers,” including Sherman Adams, Henry Cabot Lodge, Herbert Brownell, Fred Seaton, and John Adams, would implement a deadly stealth campaign. Their most destructive weapon was a devastating report detailing how McCarthy aide Roy Cohn had pressured the U.S. Army to grant special treatment for another McCarthy aide, the newly drafted G. David Schine. It was this report, skillfully orchestrated by the White House, that led to the army-McCarthy hearings and ultimately to the Wisconsin senator's undoing. As McCarthy withered before the television cameras, Ike maneuvered to prolong the hearings until the damage to McCarthy was complete.

The anti-McCarthy campaign had its ignoble side. White House advisers and allies, including McCarthy's nemesis, Joseph N. Welch, of “have you no sense of decency” fame, fanned rumors that Roy Cohn and G. David Schine were engaged in a sexual relationship. Their tactics—fair and foul—prevailed in the end.

Two caveats. Nichols notes that many of McCarthy critics never appreciated the subtlety of Eisenhower's strategy. That is true and helps explain why Ike was perceived for so long as ducking the McCarthy challenge. But there are times in Nichols's account when Ike's hand is so hidden that it is visible only to the author. More important, although Nichols leaves no doubt that Ike contributed to McCarthy's demise, he goes too far in suggesting that Ike destroyed both McCarthy and his methods. McCarthyism survived the army-McCarthy hearings. It survived the Senate's subsequent condemnation of McCarthy. McCarthyism even outlived McCarthy himself (who died in 1957), resurfacing for deployment against civil rights and anti–Vietnam War activists during the 1960s and early 1970s.