South Korea at the Crossroads: Autonomy and Alliance in an Era of Rival Powers, Scott A. Snyder 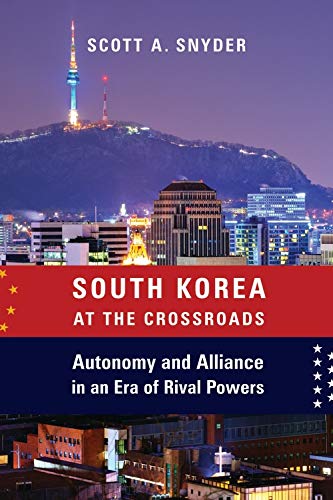 Despite having a population twice the size and an economy 40 times as large as North Korea’s, South Korea (the Republic of Korea, or ROK) consistently loses to the North when it comes to competition for international media attention. Pyongyang’s pursuit of nuclear weapons and its ongoing confrontation with the United States make for more exciting headlines, but South Korea’s position as the world’s 11th largest economy, successful democracy, and staunch U.S. ally are hardly trivial. Unfortunately, South Korea is not only faced with a belligerent North Korea but is surrounded by much larger and more powerful countries (China, Russia, and Japan) that overshadow the ROK and constrain its actions and policy choices.

Scott A. Snyder, director of the program on U.S.-Korea policy at the Council on Foreign Relations and one of the foremost American experts on Korean politics, explores how South Korea pursues its objectives amid these constraints in this useful and compelling book. Establishing an analytic framework through a pair of autonomies—outward orientation versus inward orientation, alliance versus autonomy—Snyder traces South Korea’s foreign policy behavior along these two axes, resulting in four approaches: parochial alliance dependency, alliance-enabled internationalism, internationalism plus autonomy, and independenc