Jordan and the Arab Uprisings: Regime Survival and Politics Beyond the State, CURTIS R. RYAN


Reviewed by Laurie A. Brand 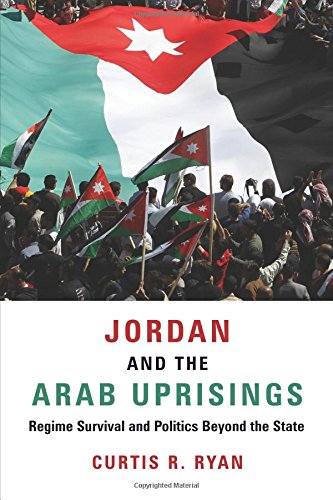 As the euphoria around the so-called Arab Spring has dissipated, more dispassionate assessments have come to characterize the scholarship on what are now generally referred to as the Arab uprisings. In the work under review, Curtis R. Ryan explores how the interaction of state institutions and societal actors shaped Jordan’s experience during (and since) this critical period. Placing post-2010 developments in historical context, the study’s primary goal is to discern the role of elements of continuity and change in regime survival.

The chapter covering the Hirak, the groups of largely young, Transjordanian demonstrators who became the symbol of the uprising in the kingdom, is the most clearly focused on grassroots activism. The other chapters, on political parties and opposition, as well as identity politics and elections, cover what has become normal politics in Jordan: proclamations from above of an intention to reform followed by measures focused on procedure rather than substance. Indeed, the descriptions of successive constitutional amendments as well as the dizzying number of changes in the electoral law underline a central theme of Ryan’s engagingly written study: how myriad rounds of (unfulfilled) commitment to reform contribute to forestalling threats to stability from below.

Jordanians, Palestinians and the Hashemite Kingdom in the Middle East Peace Process, Adnan Abu-Odeh Reviewed by Laurie A. Brand

Israel, Jordan, and the Peace Process, Yehuda Lukacs Reviewed by Laurie A. Brand