Empire of the People: Settler Colonialism and the Foundations of Modern Democratic Thought, Adam Dahl 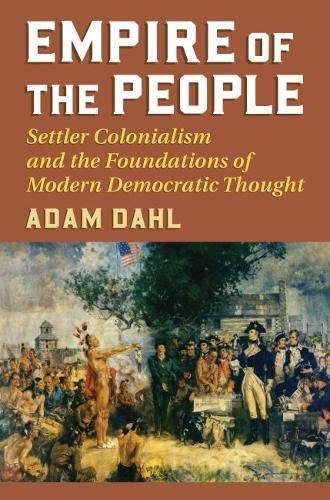 Despite the centrality of frontier myth to American national identity, scholars mostly have been loath to explore how settler colonialism has shaped the substance of democratic thought in the United States. Adam Dahl’s new book, Empire of the People, offers an important corrective to this general tendency. Over the course of six impressively researched chapters, Dahl shows how key concepts in the pantheon of American political ideas— including federalism, constituent power, and, more broadly, an egalitarian civic culture—not only developed in tandem with settler practices but were premised on the disavowal of indigenous sovereignties and the elimination of native peoples. Democracy in America, Dahl argues, has been forged through dispossession.

Moving beyond the established framework of liberal imperialism, Dahl proposes a theory of “democratic empire”: a political formation in which democratic self-rule is both the “primary means” and the purported end of imperial expansion (p. 9). According to Dahl, the central agent of colonial expansion in American history has not been a centralized administrative apparatus or the imperial presidency but the sovereign people. And if in dominant narratives the frontier experience has underpinned the mythos of exceptionalism, for Dahl, it demonstrates the opposite—the t