Our Frontier Is the World: The Boy Scouts in the Age of American Ascendancy, Mischa Honeck 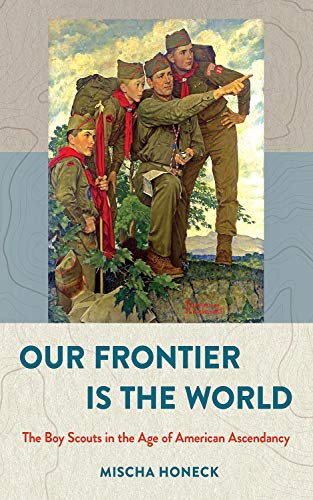 Scouting’s sacred myths of origin always celebrate the jolly “boy-men”— Robert Baden-Powell, Dan Beard, Ernest Thompson Seton—who brought the love of outdoors, the joys of competition, and the pleasures of male friendship to boys of all ages. In spite of the adventures and good times associated with it, scouting has at its heart an enormously serious mission: the production of morally upright, obedient, and even God-fearing citizens. It grew out of Baden-Powell’s concern that the British fighting man had become weak willed and narrow chested, no longer able to defend the empire. Some 450,000 soldiers were required to defeat 40,000 scraggly Boer farmers in the Boer War from 1899 to 1902, and Baden-Powell thought something had to be done to shape the character and physique of the lower classes so that they might better discharge their imperial responsibilities.

Scout training, offered to the British public in 1907, was the answer. Promising to create from dissolute youth a body of loyal and law-abiding citizens prepared to follow orders and die for the empire, it became an instant hit. “Be a brick,” Baden-Powell exhorted his recruits, by which he did not mean exhibit integrity or solidity or strength but accept whatever place in the wall of empire is awarded you, regardless how far down or unappealing your situation