From Politics to the Pews: How Partisanship and the Political Environment Shape Religious Identity, Michele F. Margolis 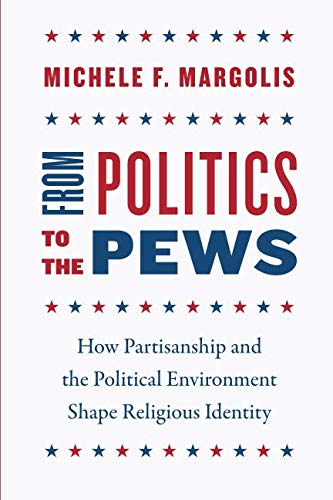 One of the central tasks of scholars of political behavior is to identify the “prime mover” of the public’s political attitudes and beliefs. Michele F. Margolis’s book makes a noteworthy contribution to this endeavor. Margolis seeks to identify the roots of the well-known “God gap” in America, meaning that Republicans are more religiously active than Democrats. The central contribution of the book is to show that at a critical juncture in one’s life cycle, partisan identities lead Republicans and Democrats down different religious paths. Partisanship affects a person’s relationship with religion.

In demonstrating that partisanship affects levels of religious involvement, Margolis’s work joins a growing list of studies documenting the causal primacy of partisanship on political attitudes. The general assumption has been that religious identities are more central to an individual than partisanship. Thus, evangelicals and active churchgoers presumably joined the GOP as it embraced the “moral majority,” while the rising numbers of atheists and agnostics joined the increasingly secular Democratic Party.

Margolis shows that at a critical juncture in one’s life cycle, this dynamic is reversed: an individual’s partisanship determines his or her level of religious involvement. Repub