Secrets and Leaks: The Dilemma of State Secrecy, Rahul Sagar 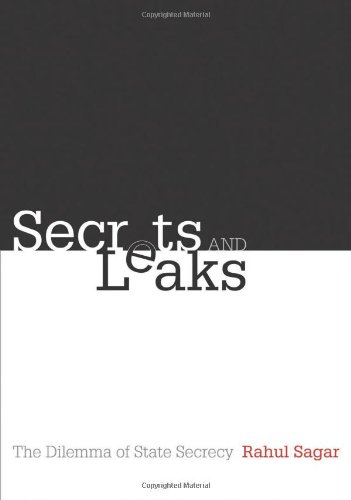 Talk about good timing. In his new book, Rahul Sagar examines all of the issues now roiling the nation in the Edward Snowden controversy. Sagar explores the fundamental question: is there any way we can know that claims of state secrecy are in fact being used to protect the national security rather than to conceal the abuse of authority? As Sagar notes, that challenge has been with us from the Founding, but it is more acute now than ever because of the changing nature of the threats our nation faces and because of the complex nature of the sources and methods we need to employ if we are to respond effectively to those threats in the modern world.

With a deep understanding of the operations of government and the press, and a rigorous and insightful analysis, Sagar offers a less than rosy picture. He concludes that the president cannot be trusted to make fair‐minded, honest, and responsible decisions in this realm, because the president has strong political motives to manipulate his state secrecy to serve his own ends.

Similarly, Congress is not a reliable counterpoint to the Executive, because it, too, has conflicting political motives that inevitably distort its judgment. Although judges may be more “neutral” and less political in these matters than elected officials, judges themselves have long recognized that they lack the expertise to make such judgments. Hence, they have always tended, with good reason, to defer to the judgments of the other branches when it comes to issues of national security.

It might be possible to create independent oversight bodies to make judg­ments about secrecy, but Sagar argues that the appointment of the members of such bodies is itself inescapably political. Thus, although it might seem prom­ising to leave questions of secrecy versus transparency to such independent entities, he concludes that in the long run, they too will inevitably become bound up in political judgments.

So who does that leave? Sagar maintains that whistleblowers cannot be given broad legal authority to make such judgments, because no one has authorized them to play this role and there is no reason to believe that they have the expertise or good judgment to make such decisions wisely. Although there are circumstances in which leaks may do more good than harm, leaving such matters to random government employees to decide such critical ques­tions on their own is no way to run a government.

Perhaps we can rely on a combination of whistleblowers and the press. That is, the press will exercise sound judgment when they receive leaked informa­tion; they will thoughtfully, intelligently and wisely balance the competing interests and make the “right” decisions about whether to disseminate the information to the public. But, of course, the press, too, has conflicting in­centives that make them unreliable decision makers. Moreover, however much one might have thought that the press could be trusted in the past, when it was relatively small and reasonably professional, in the modern world, in which any tom‐dick‐or‐harry has ready access to the Internet, the professional press is no longer a necessary intermediary for leakers.

So where does that leave us? In the end, Sagar concludes that “the ‘unruly contest’ between the press and the president is the product of historical, institutional, and political factors that cannot easily be swept aside.” His analysis “does not encourage democratic reform; instead it reveals the limits or even the futility of such reform.” In the end, he urges democracies “to forgo platitudinous calls for ‘transparency,”’ and to recognize that, for all practical purposes, the “dilemma that state secrecy poses for democracy is here to stay” (pp. 203–204).

Whether one accepts or rejects this conclusion, Secrets and Leaks is a provocative, thoughtful, and important contribution to our understanding.

Six Amendments: How and Why We Should Change the Constitution, John Paul Stevens Reviewed by Geoffrey R. Stone