Six Amendments: How and Why We Should Change the Constitution, John Paul Stevens 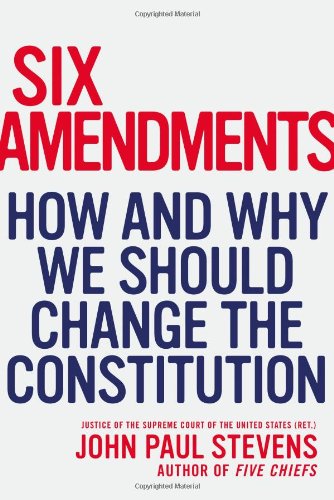 The U.S. Constitution has been amended twenty-seven times. Twenty-five of those amendments were designed in one way or another to improve the text of the Constitution. Only two of those amendments were designed to override what the nation deemed an erroneous interpretation of the Constitution by the Supreme Court. The Eleventh Amendment, adopted in 1798, overrode the Court’s decision in Chisolm v. Georgia (1793), which had held that a citizen of South Carolina could sue the State of Georgia. The Sixteenth Amendment, adopted in 1913, overrode the Court’s decision in Pollock v. Farmers Loan and Trust Co. (1895), which had held unconstitutional the federal income tax. On average, then, the nation has amended the Constitution in order to override Supreme Court interpretations of the Constitution roughly once every 112 years.

Justice Stevens calls for constitutional amendments to override Supreme Court decisions dealing with four highly controversial issues and two technical issues. The controversial issues are partisan gerrymandering, campaign finance, the death penalty, and gun control. On each of those issues, Justice Stevens, in my judgment, was right on the merits. The Court should have held partisan gerrymandering and the death penalty unconstitutional, and it should not have held campaign finance reform and gun control laws unconstitutional. A “correct” interpretation of the Constitution would have accorded with Justice Stevens’s positions on each of those issues.

But is constitutional amendment the right way to proceed? Although Justice Stevens made a brief argument for why he was right to dissent in each of these cases, he does not make much of an argument for the proposition that consti­tutional amendment is the right remedy. Given the fact that we have only twice previously overridden “erroneous” Supreme Court decisions with constitutional amendments, it seems clear that we have managed to cope with such decisions in other ways. Sometimes, we just learn to live with them. Even if some of us believe particular decisions to have been erroneous, we eventually shrug our shoulders, get used to them, and move on. At other times, political process responds to the decisions, new justices are appointed, and the “erroneous” decisions are eventually overruled or gradually gutted. This happened, for example, when the Supreme Court overruled Lochner v. New York, Plessy v. Ferguson, and Olmstead v. United States. Indeed, some of the very decisions Justice Stevens wants overridden by constitutional amendment were them­selves the product of this process. This was the case, for example, in the Court’s decisions on campaign finance, gun control, and the death penalty—all of which overruled prior decisions.

Thus, to the extent the American people agree with Justice Stevens about these six decisions, and given the extraordinary difficulty of amending the Constitution (which requires all sorts of super majorities), perhaps a more­realistic approach is for them to elect presidents who share their views and who will appoint Supreme Court justices who will gradually erode and ultimately overrule these erroneous decisions. That is, after all, precisely what Presidents Richard Nixon, Ronald Reagan, George H.W. Bush, and George W. Bush did when they appointed the justices who reached the decisions from which Justice Stevens dissented. In the long run, and given the realities of the amendment process, this may be a more-realistic strategy to get the nation to where Justice Stevens wants us get.