Presidents and the Dissolution of the Union: Leadership Style from Polk to Lincoln, Fred I. Greenstein 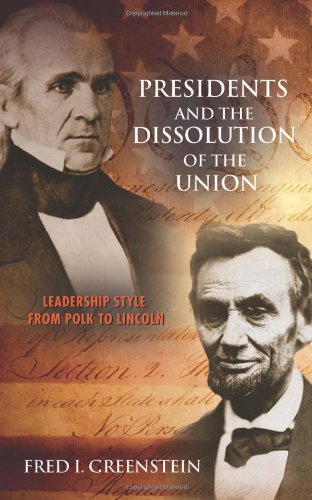 In his study of the leadership style exhibited by six presidents, James Polk, Zachary Taylor, Millard Fillmore, Franklin Pierce, James Buchanan, and Abraham Lincoln, Fred Greenstein applies the analytic scheme he first unveiled in The Presidential Difference to explain how the decisions that these men made in the critical period 1846–1861 led to the Civil War. Greenstein argues that their actions, beginning with Polk’s ill‐fated decision to provoke a war with Mexico, formed a funnel of causality that increasingly limited the options of their successors when dealing with the slavery issue, so that when Lincoln took office, it was impossible to keep the Union together short of military conflict. In addition to addressing a significant period in American history, Greenstein’s choice of topic has the added virtue of shining a spotlight on a group of presidents who, with the exception of Lincoln, tend to be overlooked in the history books. To be sure, this is not a revisionist study; Greenstein’s analysis is unlikely to change anyone’s assessment of these six presidents in terms of their historical rankings (although I admit to coming away with a slightly greater appreciation for Millard Fillmore’s presidency). Greenstein’s contribution in­stead is to show how the six