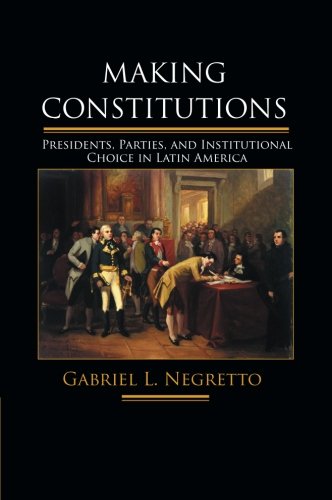 Latin America is something of a constitutional graveyard, in which formal texts have been replaced frequently over the past two centuries. Focusing especially on the period of relative political stability after 1978, Gabriel Negretto has produced a masterful book that helps us to understand constitutional politics in the region and beyond. Integrating quantitative analysis with a series of case studies, Negretto’s innovative analysis makes this book required reading for students of constitutional design.

Negretto has assembled new data to test these propositions. He starts with tracing the observed patterns of reforms to electoral institutions, then turns to presidential power. He finds that over time, electoral reforms have tended toward greater inclusivity, moving away from majoritarian systems for legislative elections and plurality rules for presidential elections. Propor­tional representation systems have tended to move from closed-list systems. Presidential roles have changed, too, with expanded power over lawmaking but reduced power in direct governance, because of decentralization and other reforms. Negretto provides a nice series of large-n analyses to explain these changes, in which the variables are tightly constructed and connected to the theory. He finds that the partisan structure during instances of reform plays a more-important explanatory role than either the legacies of the past or diffusion across borders. The account thus serves as a counterweight to analyses that have emphasized these two other explanations for design choices.

The second part of the book consists of carefully elaborated case studies: two episodes of constitution making in Argentina (1949 and 1994), and one each in Ecuador (1998) and Colombia (1991). Importantly, Negretto uses these cases not just to validate the mechanisms and processes at work in the large-n analysis, but to test elements of the theory that are not amenable to large-n design.

Negretto’s book is deeply embedded in the literature on institutional change and stasis, noting that formal constitutions not only structure politics but also are themselves targets of political maneuvering. Certain institutions, such as presidentialism and the separation of powers, are stable at the broadest level in Latin America, but subject to continuous tinkeáring when one focuses in on the details. Methodologically, Negretto demonstrates how a careful and thorough analysis of a single region can be used to establish general propositions. His theory has the advantage of bringing political elements of constitutional design to the fore, but also predicting variation in the degree to which those political elements will influence outcomes. This framework will have resonance for many years to come.