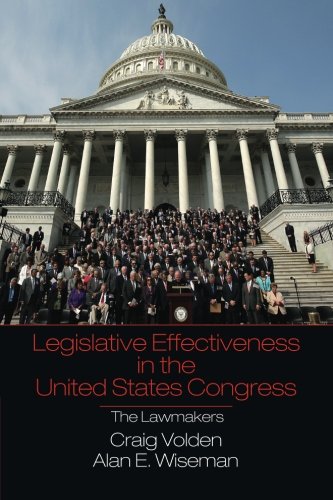 In The Federalist, No. 51, James Madison asserts that the U.S. government is “the greatest of all reflections on human nature.” It is, after all, a government managed “by men over men.” And as even casual observers of politics can attest, our elected leaders are often all too human.

In creating this new measure, Volden and Wiseman undertake an impressive data collection effort, tracking every bill introduced in the House of Representatives from 1973 to 2008 from introduction and committee markup to final passage and enactment. Unlike similar studies, Volden and Wiseman address the fact that lawmakers can be effective at some stages of the legislative process and not others. It is hard to overstate: Volden and Wiseman’s LES is an important contribution to the congressional literature.

In addition to the methodological advancement, Volden and Wiseman’s book is innovative because of its analytical focus. While hundreds of studies examine congressional productivity (gridlock, pivot points, divided government, etc.), they take a step back and bring the legislator back into research on legislating. Indeed, because of the dominance of the spatial model in the congressional literature, researchers have focused on collective behaviors as the primary route to achieving individual outcomes.

After carefully developing and validating the LES, Volden and Wiseman turn to their central question: why are some representatives more effective than others? At the institutional level, they find that members of the majority, committee chairs, and those serving on major committees are among the most effective lawmakers. And at the individual level, experienced lawmakers, women, and those who previously served in professionalized state legislatures are more effective, while black lawmakers are less effective on average.

Volden and Wiseman also examine the implications of variation in legislative effectiveness for our understanding of congressional organization. Among the notable results, they dig deep into why members of the majority are among the most effective lawmakers. According to their analysis, 75 percent of the variation in majority party effectiveness is a function of committee action rather than floor action. In fact, on the floor, majority and minority party members are about equally effective.

As a whole, Volden and Wiseman’s work advances the literature on both congressional organization and congressional behavior. If there is one limitation to their work, it is the (exceptionally difficult) question of just how much of a member’s effectiveness is attributable to innate abilities versus institutional conditions. This question manifests in two important ways.

First, given their focus on “the lawmakers” (as the title of their book suggests), whether effectiveness is innate or institutional is a central puzzle. And while it is difficult to disentangle these two factors, one analysis suggests that much of a member’s effectiveness is beyond his or her control. Indeed, the correlation between a member’s LES from one Congress to the next is just 0.34 (Republicans) and 0.24 (Democrats) once they account for changes in majority status (pgs. 31–32). Second, and relatedly, a number of Volden and Wiseman’s organizational conclusions mirror the established wisdom in institutionally focused studies. In this respect, some may critique their work as a creative repackaging of existing results (although it is not).

All in all, in this important book, Volden and Wiseman bring to life a neglected aspect of congressional behavior: each member’s capacity to shepherd his or her bill(s) through the legislative process. In the end, their legislative effectiveness score represents an important lens through which to assess how Congress works (or does not).

The Geographies of Economic Voting in Presidential and Congressional Elections, Jordan M. Ragusa and MATTHEW TARPEY