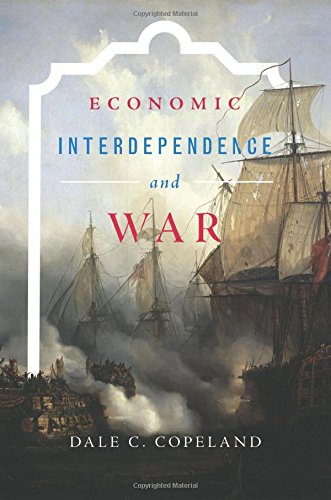 War is rare but important. Trade is increasingly central to international relations, growing in value, and thus it is important as well. Perhaps rising trade levels will help maintain world peace? In his ambitious new book, Economic Interdependence and War, Dale R. Copeland sets out to resolve an enduring debate between those who see commerce as inflammatory, or at least not particularly helpful, and the now-dominant view that trade is pacifying. The core of this effort is acknowledged to be theoretical; Copeland correctly notes that the chief flaw (among many) in the expanding research on this subject is the lack of sufficient deductive grounding. Ideas for and against commercial peace are plausible but probably incorrect.

How do we account for consistent but surprisingly weak evidence of a liberal commercial peace? Copeland identifies the critical “switch” determining pacific and incendiary effects of trade as expectations: what nations believe will be the case in the future. If sovereigns think that trade will be increasingly important, they cooperate. If they perceive that trade is in decline, they tend to follow other motives for conflict to political violence, even war.

There is much to admire about this exhaustively researched volume. Copeland is a rarity among contemporary international relations scholars. He is thor

When the Stakes Are High: Deterrence and Conflict among Major Powers, Vesna Danilovic Reviewed by Erik Gartzke