The First Congress: How James Madison, George Washington, and a Group of Extraordinary Men Invented the Government, Fergus M. Bordewich 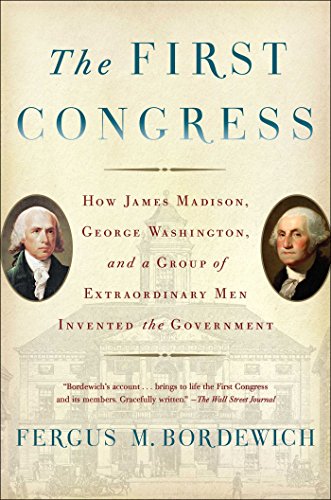 “In no nation, by no Legislature, was ever so much done in so short a period for the establishment of Government, Order, public Credit & general tranquility.” So wrote John Trumbull, a Hartford lawyer, in a letter to John Adams at the close of the First Federal Congress (p. 13). Fergus M. Bordewich tells us the story of this Congress, sketching its principal characters and the momentous decisions that have defined the structure of American government down to today. The book draws extensively on the materials amassed by the First Federal Congress Project, a center affiliated with the Department of History at George Washington University that is dedicated to collecting and disseminating documents related to the history of this Congress. Bordewich’s excellent use of these sources enables him to present a rich and textured view of representatives and senators as they deliberated questions such as whether the president would be referred to as “His Elective Majesty,” the first amendments to the Constitution, a revenue bill, the chartering of a federal bank, the location of the capital—temporarily housed in New York—the assumption of state debts, the negotiation of treaties with indigenous nations, and other issues of pressing concern.