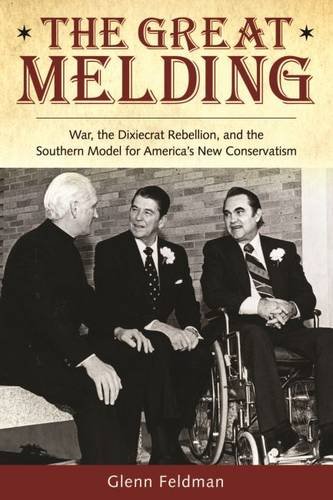 This book lacks subtlety and nuance. But, to a large degree, that is its author’s ultimate point. For Glenn Feldman, the origins of modern American conservatism cannot be found in the complicated and ever-changing landscape of suburbanization and morphing Sunbelt identities. It did not come about as the result of Texans’ or midwesterners’ migration to California and the West (or the religious sensibilities that came with them), and it was not the consequence of a fusion among various regional cultures and priorities. No, for Feldman, understanding the origins of Republican power—both nationally and in the South—comes down to one central motive: an unmitigated dedication to preserving white supremacy.

Boiling all other factors down to what he calls “Sophistic Pruning” (p. 5), Feldman presents an aggressive, confrontational, and unequivocating history of the politics of white supremacy in the Deep South from Reconstruction through the early 1950s. He is particularly interested in connecting dots between southern hostility to the “New Deal’s racial liberalism” and the Dixiecrat revolt of 1948, which Feldman argues was the moment—if such a moment can be identified—when southern conservatives ceased to identify themselves with the national Democratic Party and began to embrace the idea