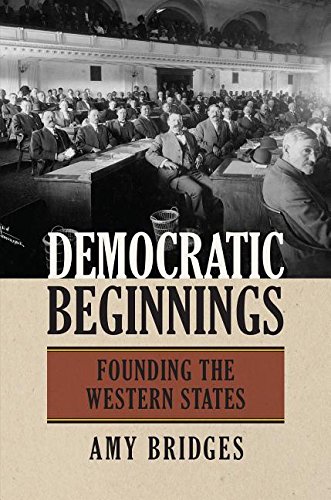 When people think of the founding of the American West, images of rugged pioneers, wide-open spaces, and clashes with native peoples tend to come to mind. Few immediately imagine well-dressed men gathered indoors to write governing documents. However, as Amy Bridges shows in Democratic Beginnings, the story of how westerners came together to create the region’s state governments is just as distinctively western—and, at the same time, just as fundamentally American—as is the story of its settlement. Bridges’s book simultaneously provides a way of understanding the founding of the western states and an unusual vantage point from which to consider key controversies in American politics during the nineteenth and early twentieth centuries.

The body of Bridges’s book is composed of three chapters exploring periods in which western state constitutions were written. Chapter 2 concerns the constitutional conventions of the far western states during the 1850s and 1860s. Here, Bridges emphasizes western similarity rather than distinctiveness, arguing that the writing of these Civil War–era constitutions reflected national antebellum values like “the importance of citizen character and wariness of corporations” (p. 29). Chapter 3 centers on the Gilded Age, the period featuring the largest number of western constituti