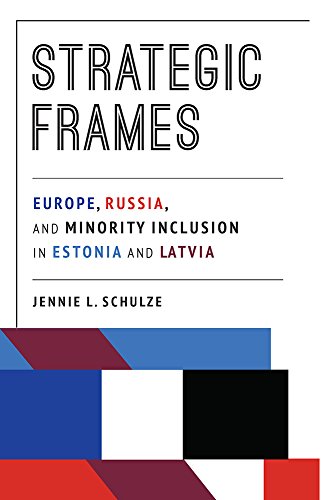 When countries in Central and Eastern Europe began their efforts to democratize and join the European Union (EU) following the collapse of communism, a new body of literature emerged examining the role of external actors in domestic reform processes in the region, including the development of ethnic minority protections. EU and NATO membership conditions, along with monitoring and recommendations of other institutions, helped shape minority rights, though domestic factors often mediated their influence. A related (and sometimes combined) body of literature has explored the efforts of “kin states” in the region to protect their ethnonational “kin” who are minorities in other states.

Jennie L. Schulze's Strategic Frames ties together and fits squarely in this literature while offering some new perspectives and a time span encompassing independence through 2015 in two countries that joined the EU in 2004. The book explains how both “European institutions” (including the EU, Council of Europe, Organization for Security and Co-operation in Europe, and NATO) and Russia influenced policymaking toward Russian speakers in Estonia and Latvia. The book's title refers to its focus on domestic policymakers’ agency in strategically framing external pressures to support their own policy positions. Schulze defines stra