The End of Exceptionalism in American Education: The Changing Politics of School Reform, Jeffrey R. Henig 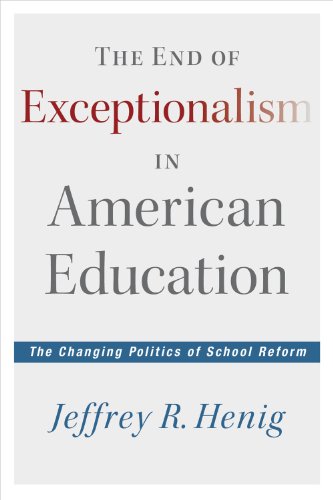 Jeffrey Henig’s new book is about the changing governance of the public schools and why it matters. Henig’s central theme is that local, single‐purpose gover­nance—a hallmark that has made education “exceptional” by comparison to other realms of public policy—has been giving way to general‐purpose gover­nance, sometimes through mayoral control, but mainly through a shift to state and national decision arenas. With this ongoing shift in governance, he argues, education is being plunged into the same governance mix with other public policies, and this change has consequences for power, politics, and reform.

The book’s title is a bit too bold. Henig does not really claim that “excep­tionalism” has come to an end or that a dramatic break has occurred. He is talking about incremental changes that have been unfolding over a very long period of time, saying that education’s special status “has been eroding” and is “under pressure and beginning to fray.” These are developments, moreover, that are already well known to scholars familiar with the basic history of American education. Everyone can agree that local control has been under siege for decades, and that state and federal arenas, including the courts, have been actively involved in governing public education.

What is most interesting about Henig’s analysis is not the heralding of a new era. It is his attempt to explain why there has been a long‐term shift away from local control toward higher levels of governance and what the consequences are. These are important questions that scholars have rarely addressed. Here, Henig is moving into new terrain, and for that, he deserves great credit. This is what contributions are made of. For reasons that I can only briefly discuss, I think the analysis he carries out misses the mark in key respects. But as a novel attempt to tackle big questions, it is sure to turn on light bulbs for many scholars in this field and to inspire a spate of new theory and research on educational gover­nance. That is a very positive contribution indeed.

At the heart of Henig’s analysis is a distinction between single‐purpose and general‐purpose governance, and a recognition that power is typically struc­tured very differently in the two types of arenas. Single‐purpose governance, characteristic of local school districts, tends to be “dominated by a smaller array of highly focused interest groups” and vulnerable to capture, while generalpurpose governance, characteristic of state and federal decision arenas (as well as mayoral control), tends to be “more accessible to groups with a less intense stake in the public schools,” more competitive, more crowded with other policy issues—and more open to reform (p. 3).

The type of governance, therefore, matters a lot. And because it does, Henig argues, the political dynamics should play out in a distinctive way over time, following a logic explicitly rooted in Frank R. Baumgartner and Bryan D. Jones; the established interests have incentives to engage in “venue defense” to protect local control from intrusion by outsiders, while reformers have incentives to engage in “venue shopping” in order to shift decision making to general‐purpose arenas where they can exercise greater influence.

It is a major plus that Henig aims to approach governance in a theoretical way. The analysis that makes up the book, however, is mainly an effort to highlight the making of education decisions in general‐purpose arenas, and to explain why key players like presidents, governors, and courts have chosen to get involved. The analysis, in other words, is almost entirely devoted to the change in governance—and has very little to say about the resistance to that change, or about the established interests that, according to the theory, have a stake in protecting local control.

When Henig does refer to these local‐level interests, he is exceedingly vague. Most often, he refers summarily to “teachers and parents” as the key local interests—without mentioning unions (or school districts), and without any sense that unions and parents are in very different political leagues. On occa­sion, he points out that the unions are indeed powerful (although he hedges on that). But he makes little attempt to understand the sources or extent of their political power, and no attempt to understand their basic job interests, what motivates their approach to education policy, or how we should expect them to approach governance issues. As political actors, they are ciphers. The same is true for school districts.

As a result, Henig’s analysis sheds little light on how or why local control is protected (if imperfectly) through power and politics. His theory presumably implies that “teachers and parents” should be in the vanguard of resistance. But parents are obviously not organized to do that, and Henig provides no system­atic account of their political capacities or efforts. The unions clearly are well organized for political action. But we do not learn anything about whether or how they have mounted a defense of local control over the years.

Had this issue been seriously pursued, the analysis would surely have revealed a rather uncomfortable finding for the theory: that the teachers unions (“teachers”) are not fully engaged in the defense of local control. They defend it when it is to their advantage to do so—but often it is not. With so much authority vested in higher levels of government, especially at the state level, and with so much money available at those levels, the unions have strong incentives to use their political power in those general‐purpose arenas to pressure for things they value—from bigger budgets to new programs to job protections to work rules to court‐imposed reforms of state finance. In many respects, then, they want the state and federal governments, including the courts, to be actively involved in public education.

To be sure, these higher‐level governments can also get engaged in ways the unions find threatening—by imposing reforms, for example, like No Child Left Behind or performance‐based evaluations. When this happens, the unions (and the school districts) have incentives to marshal their power in these general‐purpose arenas to try to block; and as they do, they may become strong defenders of local control. But on a vast range of other matters, they are perfectly happy to see local control compromised by higher level governance—because they benefit from it.

It is important to add that the unions and the districts have very different stakes in local control. The districts want the money and programs that higher level governments can provide, but they also want autonomy in determining how resources are allocated. The unions are much less wedded to local autono­my. Indeed, much of their power at the state level is employed to limit the autonomy of the districts—through, for example, state‐imposed laws regarding teacher dismissals, seniority‐based layoffs, evaluation procedures, preparation time, class size, leave time, and sundry other matters that would otherwise be up to the districts to decide. When it comes to local control—and “venue defense”— then, the unions and the districts are not on the same team. The real story is more interesting and consequential than that.

But this is a story that Henig doesn’t tell. His analysis is about change, and about the agents of change. It is not about vested interests in the traditional system of governance. We learn a lot about how presidents, governors, the courts, and reform groups have used general‐purpose arenas to make education policies—and little about how the unions and districts have approached issues of governance, exercised power, defended local control (or not), and weighed into the political dynamics of change. Fundamentals are missing. And without them, the analysis cannot give us a balanced understanding of why the gover­nance of America’s schools has changed as it has over time, or what the consequences might be.

An Education in Politics: The Origin and Evolution of No Child Left Behind, Jesse H. Rhodes Reviewed by Terry M. Moe