The Death of the Income Tax: A Progressive Consumption Tax and the Path to Fiscal Reform, Daniel S. Goldberg 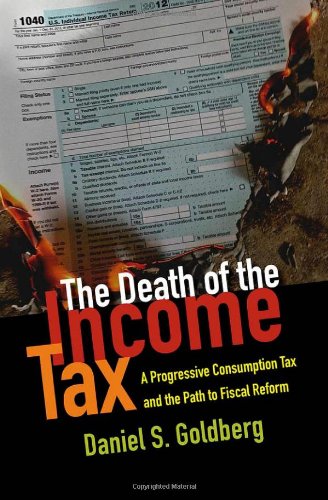 In this ambitious book, Daniel S. Goldberg begins with the claim that the income tax is “broken beyond repair” (p. 3). Some of these problems, like the proliferation of tax provisions that benefit special interests, are a matter of design. Others, like the inconsistent taxation of economic gains, are endemic to any tax on income. In the first half of The Death of the Income Tax, the author painstakingly details these and many other problems with our current tax system.

What, then, should be done? Goldberg’s answer is to replace the income tax with what he terms an “e-Tax”—a type of progressive tax on consumption. His proposal echoes a familiar refrain in the tax literature. Taxing consumption rather than income has been suggested by some of the most influential thinkers in the field. For example, Bill Andrews’sarticle A Consumption-Type or Cash-Flow Personal Income Tax remains a must-read 40 years after it was published in the Harvard Law Review.