Continental Drift: Britain and Europe from the End of Empire to the Rise of Euroscepticism, Benjamin Grob-Fitzgibbon 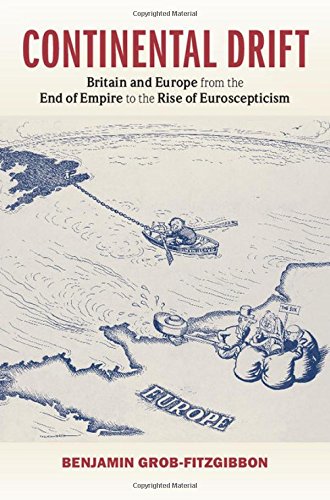 As we face the consequences of the United Kingdom’s 2016 referendum decision to leave the European Union, Benjamin Grob-Fitzgibbon’s recounting of Great Britain’s troubled relationship with European integration could not be more timely. Continental Drift is traditional diplomatic history that is also a source for understanding things to come. The story told is complicated. After 1945, caught up with domestic reforms, austerity, and imperial uncertainty, Labourite Britain refused to join the European Coal and Steel Community (ECSC). In the 1950s, Conservative governments then proposed a free trade zone—the European Free Trade Association (EFTA)—to rival, and subvert, the European Union (EU) but lost.

Next, faced with rapid domestic economic decline and a rapidly changing Commonwealth, Conservatives tried to join the European Economic Community, only to be refused twice by Charles de Gaulle for being a Trojan horse for excessive economic liberalism and American domination. After de Gaulle resigned, Europhile Tory prime minister Edward Heath was able to negotiate British membership in 1973 just before his government fell to a miners’ strike. Labour, which held a referendum to confirm the membership, was then in its turn defeated by strikes, after which the party was taken over by nationalist Eurosceptics.

Margaret Thatcher, after battling the European Community about the United Kingdom’s budget bills, was nearly overcome by similar national economic problems until the success of the Falklands campaign gave her leverage to pursue hard liberal domestic reforms. Later, as the EU’s Single Market innovations unfolded, she began to rant against “socialism through the back Delors” while pushing her domestic reforming too far, and she, too, was cast aside, in part because of her Euroscepticism. Grob-Fitzgibbon’s narrative discusses the John Major and Tony Blair years in less detail—the British opt-out from the Economic and Monetary Union (EMU) at Maastricht is well treated, but the later decision by Tony Blair and Gordon Brown to stay out of the EMU saved the United Kingdom from many later problems.

The narrative provides ample material for understanding how recent British politics came to be riven with conflict partly organized around Eurosceptic themes. The preceding story quickly became path dependent. The postwar Labour government could not possibly have joined the ECSC because it had just nationalized the British coal and steel industries that the ECSC was about to run supranationally. Without the United Kingdom, however, the ECSC and Rome Treaty built strong foundations, which precluded EFTA success while the EFTA initiative, together with French takes on the U.K.-U.S. “special relationship,” fed de Gaulle’s later obduracy along with British Euroscepticism. Later, with the EU on even firmer institutional and policy grounds, the late-joining United Kingdom had to accept practices that challenged cherished British notions of parliamentary sovereignty.

As these events accumulated, they provided openings for dissenters of all kinds and about all issues to conflate Europe with constitutional and policy sellouts and economic failures. Anyone on either side of the Westminster aisles or protesting outside thus acquired a ready-made vocabulary for impugning leaders and scapegoating the EU for deficiencies in the United Kingdom’s economy, society, and international positions.

Repetitive British Eurosceptic eruptions have most often had significant subtexts and causes beyond than the EU itself. “Brexit” itself is the product of David Cameron’s ill-conceived referendum strategy to protect himself against the minority of Eurosceptics in his party who might have threatened his leadership. Beyond this, the referendum’s verdict probably had less to do with the EU than with the anger of large numbers of British citizens about difficult material situations that had all too often been neglected by Westminster elites. It is thus odd that in his closing paragraphs, Grob-Fitzgibbon argues, as does one of the blurbs on the book’s cover, that imperial nostalgia has been the underlying reflex behind Euroscepticism. His book tells a very different, more interesting, and much more complicated story.

The Strange Death of Marxism: The European Left in the New Millennium, Paul Edward Gottfried Reviewed by George Ross