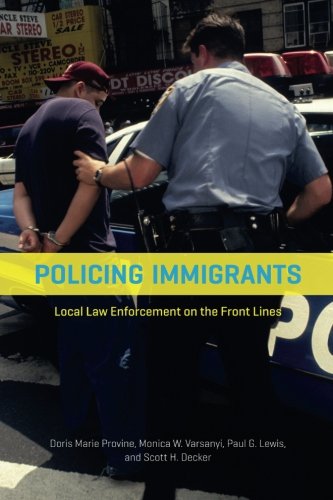 Since the 1990s, local communities have come under pressure to help enforce federal immigration law. This phenomenon represents a major shift, both for the federal government’s exclusive legal jurisdiction over immigration and for the politics and practices of local policing. Policing Immigrants examines how local communities have been responding. Given the sheer variety of communities involved and a rapidly shifting landscape, it is a formidable and ambitious  undertaking.

These authors cut across the topic in multiple ways, using multiple methods. They begin with an outstanding history of immigration federalism, tracing the court cases and political shifts that first placed immigration under federal control and, a century later, inspired federal authorities to look to local law enforcement as a “force multiplier,” developing various “federal–local policing partnerships” (p. 27).

They then examine original surveys of police chiefs and county sheriffs as well as case studies of seven cities to demonstrate how the push for federal–local partnerships ended up producing a complex patchwork of policies within overlapping jurisdictions. Some police departments and county sheriffs adopted policies supportive of their immigrant populations; others embraced a collaborative role with Immigration and Customs Enfor