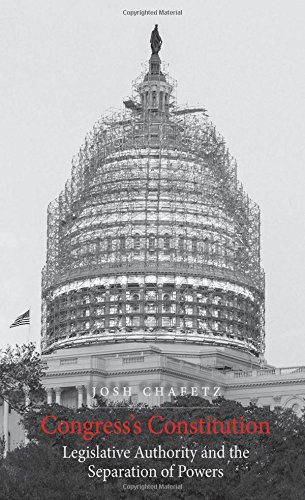 In this book, Josh Chafetz, professor of law at Cornell Law School, provides the most extensive, thoughtful analysis of the constitutional scope and significance of congressional authority since the late David Currie's The Constitution in Congress. Currie tracked nearly day by day the constitutional debates in Congress from 1789 through the beginning of the Civil War in 1861, with the fourth and final volume appearing shortly before Currie's death in 2007. Chafetz assumes an equally, if not more ambitious, focus “on the ways that Congress and its constituent parts—individual houses and individual members—can and do make use of constitutional powers other than the power to pass laws” (p. 2). “If one truly hopes to understand Congress’ ability to have an impact on our national life,” he explains, it is “essential” to recognize that a book about congressional power is necessarily a book about the separation of powers” (p. 2). His largely positive account of congressional power is “multiplicity based, because it highlights the ways in which claims of authority multiply and overlap in a nonhierarchical order” (p. 2). The conflicts within the Congress have, in other words, connections to and ramifications for the conflicts between Congress and the other branches.