US Foreign Policy in the Post-Cold War Era: Restraint versus Assertiveness from George H.W. Bush to Barack Obama, Tudor Onea 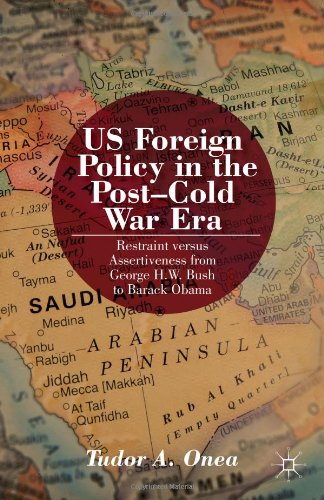 For students of American foreign policy, the Cold War provides a pretty big conundrum. For one thing, it was the first time the United States committed to playing a “permanent” global leadership role. For another, America’s Cold War strategy was grounded in a conceptually sound doctrine: containment. And even though containment was never as accepted (by the public or policymakers) or unified (as a coherent strategy) as it appears in retrospect, at least it was something. Indeed, for 45 years, containment offered an intellectual blueprint though which the broad strokes of America’s military, economic, and cultural (soft power) strategies could be developed—through the North Atlantic Treaty Organization, Bretton Woods, and the spread of liberal‐democratic ideas.

Then the Cold War ended. And ever since—brief euphoria over Francis Fukuyama’s “End of History” notwithstanding—the United States has been left wandering in search of a grand (or, really, any) strategy.

In US Foreign Policy in the Post‐Cold War Era: Restraint versus Assertiveness from George H.W. Bush to Barack Obama, Tudor Onea does not seek

The Reagan Imprint: Ideas in American Foreign Policy from the Collapse of Communism to the War on Terror, John Arquilla Reviewed by Stuart Gottlieb