The Next Great War? The Roots of World War I and the Risk of U.S.–China Conflict, Steven E. Miller and Richard N. Rosecrance , eds. 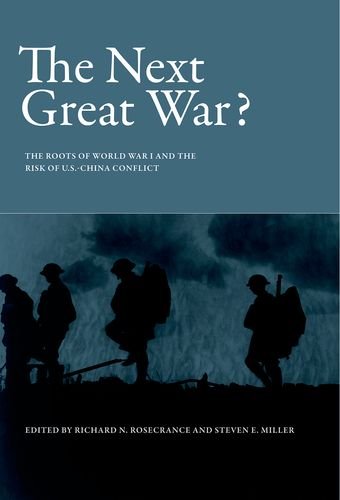 To mark the centenary of World War I, an impressive array of distinguished scholars and practitioners have produced an edited volume revisiting the origins of this momentous conflict and drawing implications for the early twenty-first-century rise of China. This is a welcome development because a large body of international relations scholarship has emerged from research on the causes of Europe’s “Great War.”

However, this volume is not another presumptive effort to project Europe’s past as Asia’s future. In fact, the contributors tend to shy away from seeking to identify clear parallels or direct analogies between Europe then and Asia now. There is no attempt, for example, to depict Xi Jinping’s China as Wilhelmine Germany, nor is there any effort to cast the current great power rivalry between Washington and Beijing as a latter-day contest between a London and a Berlin.

Rather, contributions are thoughtfully arranged around three topics. Each grouping reassesses the voluminous scholarship on the causes of World War I and offers a few observations on contemporary East Asia. The first topic is the influence of the international system. A strong theme running through this grouping and many chapters, as Steven E. Miller notes, is the “entrapping” nature of alliances (p. xxi): Germany, for example, was dra